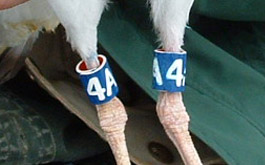 Alabama Audubon initiated the Alabama Coastal Bird Stewardship Program in 2017 to monitor and protect coastal nesting species, including American Oystercatchers. Oystercatchers are year-round residents along the Alabama coast. In the mid-1980s the breeding population was estimated at 2-3 pairs (AL BirdLife). A breeding season survey conducted by Birmingham Audubon and partners in 2019 documented 4 pairs. During the mid-1970s through mid-1990s, counts of individual oystercatchers during the nonbreeding season ranged from 3 to 55 on Dauphin Island (AL BirdLife).

Our goals are to (1) collect standardized data on the numbers and distribution of individuals across the annual cycle, (2) determine nest and brood survival across years and identify factors that influence survival, (3) determine dispersal rates of juveniles, and (4) identify management strategies that will increase productivity and the breeding population size in Alabama.

Surveys are conducted year-round for several priority species, including the American Oystercatcher. The location and behavior of individuals are recorded. These data, combined with band resight data, will provide information on the distribution and habitat use of adult and juvenile oystercatchers across seasons.

Nesting pairs will be monitored throughout the breeding season to determine nest and brood survival and identify causes of failure.

By banding chicks prior to fledging, we hope to obtain resight data that can be used to understand dispersal and survival of juvenile oystercatchers.

Banding will begin during the 2019 breeding season.

Coastal staff will collect resight data throughout the year.